Immortal Buildings and Distant Cries of the Civil War

When watching archaeology programmes, it is fascinating to see someone carefully extract an artefact from the ground which has been locked away in the soil for hundreds or thousands of years. When a Roman brooch is teased into the 21st century air, is it amazing to think that the last person whose fingers touched that artefact breathed their last breath at least 1700 years ago.

What is sometimes tricky to appreciate is that the same isn't true of extant structures. Period buildings have not been hidden from sight since their own time, but they have remained an every day landmark for scores of generations. I find it slightly bemusing to see the Colosseum in paintings from the 18th century (for example the one below by Antonio Joli) because the people in Georgian costumes look strangely anachronistic next to it. Part of my brain struggles to believe it survived second-by-second for two millennia. 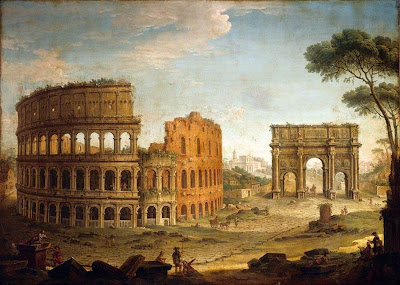 It's amusing to think that anyone you can name from history could have stood within the famous Roman amphitheatre - William the Conqueror, Geoffrey Chaucer, Dick Turpin or Florence Nightingale. They could all have stood and pondered how strange life was in the olden days.


I keep this in mind when I tour towns and villages looking for my ancestors. I love to find Tudor buildings because I know that even if I can't find my ancestors' own homes, at least I've gazed upon a building that was a regular sight to them in their daily lives. A recent expedition to Stonehouse near Stroud in search of the Grimes family turned up the tastefully preserved "Tudor Tandori" - although it seems unlikely to have been a Tandori since Tudor times.

The oldest building in my village is probably one of the sandstone cottages of uncertain architectural origin, possibly late 16th century. I find these buildings fantastic keystones for the daydreamer and it's astonishing to think that the foundations of that building were laid by the hands of workmen when Elizabeth I was the popular icon of the day. It is pleasing to contemplate the long-ago sunsets that were watched through those windows, and touch the walls which have been washed by a hundred-thousand rain storms. 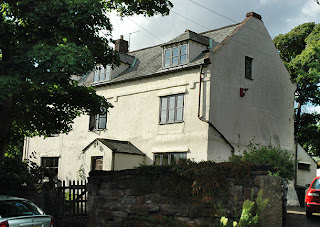 I find it a very sobering prospect to stand next to any structure which pre-dates the civil war in particular. There can be few events that gripped the country in a manner so tumultuous that it could have divided any street, house or family. The war was a crisis from which it would have been impossible to hide, and our peninsula was still held by the King in 1643, but 1644 saw Prince Rupert lead a Royalist army to recapture Liverpool, just ten miles from here. When Parliamentarian troops left Liverpool to its own devices, many of the 500 citizens were killed when the Royalists sacked the town.

Although the English Civil War officially ended in 1651, there were still outbreaks of violence. The oldest dated building here is the Manor House (shown above), with a stone showing 1655 and it was in that year that Royalist insurgents in the south-west attempted to rise up against Cromwell's parliament. They were defeated and the matter came to a savage end with the beheading of the ring-leaders.

When the Manor House was four years old our peninsula had another brush with the troubles of the age when Chester became home to rebellion, just 17 miles down the road. On 2nd August 1659 Sir John Booth marched on Chester with a force of insurgents, where sympathisers opened the gates for him. But after three weeks, Chester surrendered back to Parliamentarian forces without resistance and Booth himself was arrested dressed as a woman after he tried to disguise himself and flee to the continent.

That unassuming white building stood impassive as the monarchy was restored, plague struck, America declared independence, the steam engine was invented, the railway came to the town, two world wars passed by, the television era began, and then the internet was invented. And now you're reading about that house which pre-dated the first newspaper, via a device which would seem like witchcraft to those who built it.

Gav
I write about all aspects of British history, particularly social and economic developments which formed our modern life.

I am interested in the relationship of the past and the present, and I like to explore my ancestors' lives and the times they lived through.